The 2030 Agenda for Sustainable Development, adopted by the United Nations General Assembly in September 2015, sets out an ambitious vision for global development. The 2030 Agenda aligns with the Charter of the Commonwealth which affirms the importance of sustainable development to ‘eradicate poverty by pursuing inclusive growth whilst preserving and con

There is much potential for sport to contribute to sustainable development and, particularly, to help young people unlock their potential – but this requires policy makers to think critically about how they marshal the resources of national, regional and local government in Commonwealth countries whilst also capitalising upon, in complementary ways, the contribution of big business, national and international NGOs and locally based charities and civil society groups.

The Commonwealth Secretariat has recently appointed Dr Iain Lindsey and Sarah Metcalfe (School of Applied Social Sciences) and Professor Tony Chapman (Policy&Practice, St Chad’s College) to update and build upon current policy guidance, as reported in the Commonwealth Guide to Advancing Development through Sport, by Professor Tess Kay and Oliver Dudfield, published in 2013. 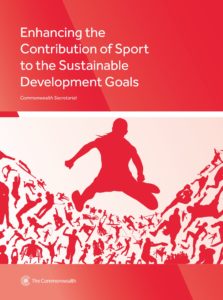 The work, which began in February 2016, involved a substantive evidence review followed by wide-ranging consultations with policy makers and practitioners from NGOs, Commonwealth governments and international sport organisations. The findings from the study and recommendations for future approaches to policy formulation were published in 2017 by the Commonwealth Secretariat.

The guide builds on the work of previous Commonwealth publications that have presented analysis of the role of sport in progressing sustainable development. Aimed at governmental policy-makers and other stakeholders, it provides evidenced and balanced policy options to support the effective and cost-efficient contribution of sport towards six prioritised SDGs.

The report is underpinned by an emphasis towards strengthening the means of implementation and the measurement and evaluation of progress, as emphasised by the SDGs and existing Commonwealth principles. Developed through extensive Commonwealth Secretariat-led consultation with relevant experts and organisations, it represents an important addition to the growing body of SDP publications, guides and research.

For full details of the publication, go to this web address: http://books.thecommonwealth.org/enhancing-contribution-sport-sustainable-development-goals-paperback