Green Door’s Michaelmas production of The Flint Street Nativity was a festive treat. Aside from the hot chocolate and warm mine pies served during the interval, the production ticked all the heart-warming boxes expected from a play about the iconic and much-loved British ritual of the school nativity.

The cosy and nostalgic atmosphere, accentuated by staging in the chapel, was in large part achieved by the creative flair of the production team, the heads of which include many of Chad’s own: Hannah Smith as co-producer, Alex Greenen as Technical Director and Teresa Cherubini as Costume Manager. Their costume and prop creations could not have been more authentic in their charmingly makeshift feel—the ass-head and giant star were especially impressive—transporting us back down memory lane to the days of bed sheets and tinsel.

Aside from all the visual delights, the hilarious, endearing, and at times very touching, performances given by the cast affected to heighten the play beyond cuteness and frivolous fun. Well done to Chadians Mikki Redhead (Wise Gold), Richard Penny (Star), Mary Lord (Ass) and Marcus Dell (Inkeeper) who formed part of the super-talented cast. Massive congratulations to everyone involved for making the play such a memorable success. All the hard-work and passionate attention to detail really paid off. 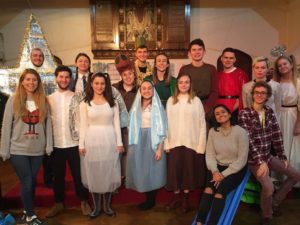