It’s always intimidating walking along the corridors in front of the classrooms. The way I deal with it is by alternatively flicking through my textbook and staring at the floor, vaguely smiling at nobody in particular from time to time. Kids see us as responsible adults and, reasonably, this impression goes hand in hand with age and it’s assumed we’re mid 30s, even though we feel closer to their age – and we are God damn it. Anyway, all this creates a clumsy in-between feeling where you don’t know what you are and consequently bemuse everyone with awkwardness. 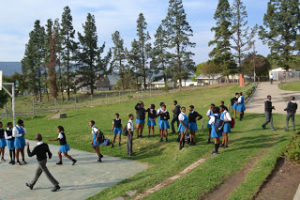 I practically fall into the Grade 9 class and remember just in time to be bright and commanding. “Good morning class” yell I, over the din of screeching chairs and gossiping. About three people respond which I deal with by placing my textbook down on someone’s desk and flicking through and shuffling papers and eventually address a child to ask where we got up to last lesson and maybe they’ll stare back at me, gaping, so I make open-book gestures with my hand and appeal to the rest of the front row until someone begrudgingly draws their book out from their bag and I stab my finger at the page and mumble “ah yes, we got up to here” by which time, hopefully, the rest of the class has noticed my presence and slid into their seats. “How are you” I shout over the din and depending on how many people respond I may shout it again but this generally quietens them down a bit. “Right class, please open your Geography books to the last work we did. Open your books. Make sure you have a pen ready.” Here someone, usually a boy, will be staring at me with his mouth open and his book insolently in his bag. I approach him and repeat the instruction, this could take time depending on the general classroom mood. Turning to the board I ask “what’s the date today” and they tell me, even though I know the date. This is because I once forgot to do this and found the class almost insulted that they hadn’t been consulted. Then I’ll wave some chalk around and deliver the topic as dictated by the textbook – I really have no idea which topics are on the syllabus, I’m just working through the chapters – and scrawl it on tiptoe on the board. Whenever I do this the script ends up bending upwards, every time. The rest of the lesson consists of 50 minutes of diagram drawing, note taking, quizzes, questions about where I’m from, whether I will take them to England with me, signs held up reading “I love Issy” or my favourite, “I smurf Issy”, and boys scrabbling for their neglected books and pens as I advance menacingly towards the back of the room. 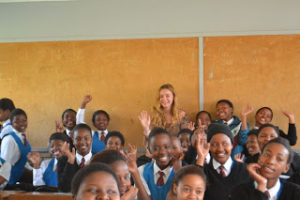 I had four lessons that day and when I emerged, post traumatically stressed, from the last I found the school absolutely devoid of teachers. I shuffled some papers around in the eerie staff room, dodged some miscellaneous low flying objects in the playground and paced it across no mans land to our house, where we were that afternoon hosting a braii. Every member of staff, from the hostels to the bin men, had perched themselves on furniture in the slim shade of our small house. A fire had been made and the R700 lamb we’d bought was sizzling over the coals. Kieran, Sinead and Phoebe had been rubbing braii spice onto chop after chop all day and we still had the biggest sausage you’ve ever seen to sling onto the grill. The hostel had conjured up an enormous amount of chicken and the teachers had brought some pork too, the only irregularity was the lack of anything that hadn’t once been alive. 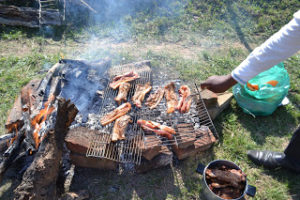 The meat was delicious and despite having about four tonnes of it was polished off by those congregated. In fact, there was remarkably little left over – by this I mean absolutely nothing apart from washing up – a mystery that was explained by the amount of tuppaware bulging from pockets and by the discovery of a teacher draining the wine box into a 2 litre Sprite bottle. Quite remarkable. We thought we’d throw a little Englishness into the mix and so Phoebe did an acapella rendition of Jerusalem – only joking – we just provided Pimms which we shamelessly hogged and consequently ‘came out of our shells’. So much so that we woke up on the grass as the sun set, parched and bleary eyed, and stepped cautiously into the house which looked like a bomb had gone off, meat sliding off the walls etc. As we lounged in squalor, Luxolo and some girls visited us from the hostel and we ended up with the car pumping music at full volume while Phoebe and I flailed and the girls tried to teach us to dance. Luxolo stayed for a few hours and we all chatted and snoozed. Braving the fridge later, I deduced that approximately zero food was left apart from a squashed half loaf of bread so we settled in amongst the mess and watched Toy Story. 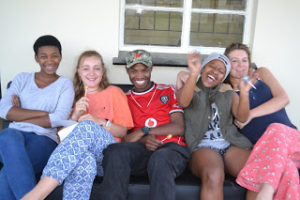 This morning we were honoured in assembly and given red St Matthews ties and made a few speeches and waved and hugged and had photos taken and said good bye to the teachers. Packed the house up, said goodbye to Luxolo, and headed off down the treacherous Keiskammahoek road, for the last time ever. So here ends the St Chad’s volunteer trip for 2016, it has been a riot and a huge learning experience, actually, and I hope the trip continues in future years.  At the beginning I wasn’t so sure what we could really achieve, whether we could ‘give anything back’. But not only have we been learning and experiencing crazy things but we’ve been able to provide answers to lots of people’s questions. I think its fair to say that the help we’ve given – through teaching and even just interacting – has created a small impact that has made it worth it, completely. 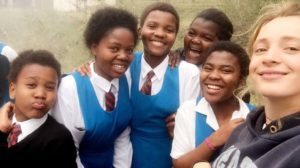